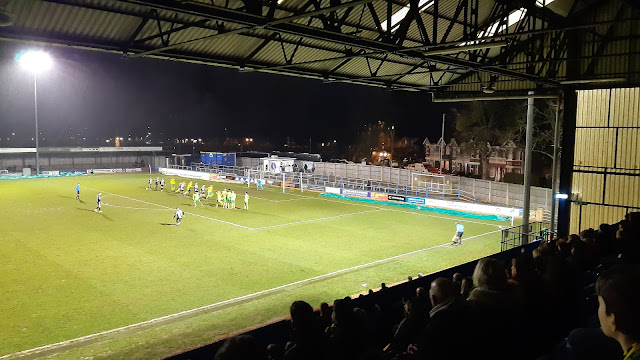 The jorney doon to Norfolk started at '11:20am bells' when aa picked 'Big Al' up in The Toon, near The Forth Boozer in Pink Lane (NOT the sheet metal workers son!)

Just ower 4 and a half hours later and on dodgy roads from Newark (A17 etc) we arrived at wor destination and parked up in a street next to the groond at aboot '4:30 bells'!

The game kicked off at '7:00 bells' and so we had plenty of time to find a boozer for a few 'gargels' and there woz one a 5 minute waalk from 'The Walk Stadium' caalled strangely 'Live and Let Live', which woz a reeel ale bar (not much for me az aa woz drivin!) 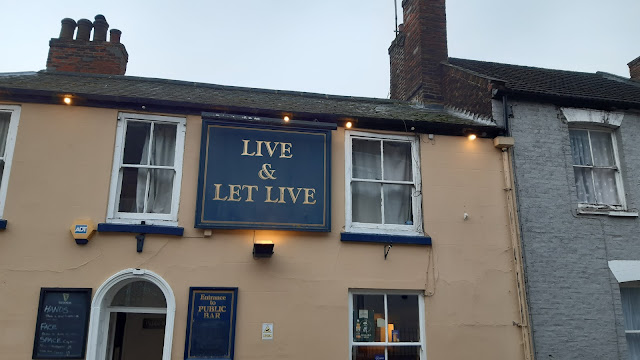 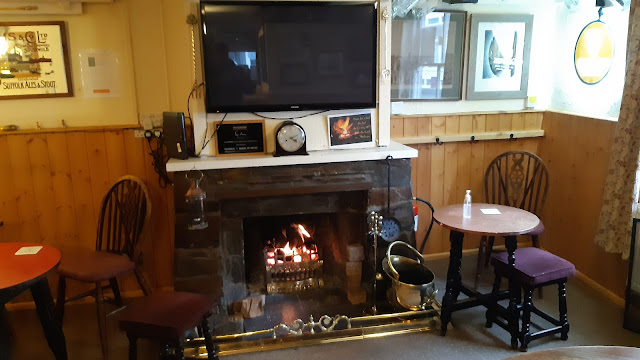 Anyway! 'Alex of St George' and 'Biffa the Beer' torned up, to make the total number of 'groundhoppers' 4 in total---so far!

It woz soon time to heed for the groond where a match ticket had to be bought from a kiosk before gannin through the tornstiles!

Big Al asked for a ticket and the lassie who woz sellin' them asked if he woz a home or away supporter!---"It doesnt matter!" he said but added that he woz a Toon fan!-- She game him an away ticket and said he could sit or stand anywhere he liked in the groond! (So wot woz the point of 'home and away' tickets if yoo could gan where yoo liked???) 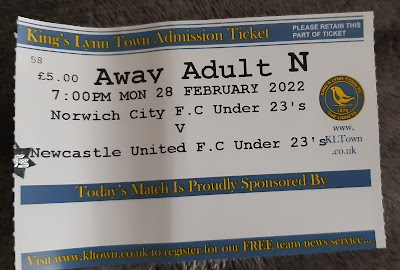 I said give me the same and 'in we went'!---It woz absolutley 'chuckin it doon, with the wind swirlin' aboot az we took wor seats in the impressive large main stand which looked az though it had been built aboot a 100 years ago! (The groond woz opened in 1879, apparently!) 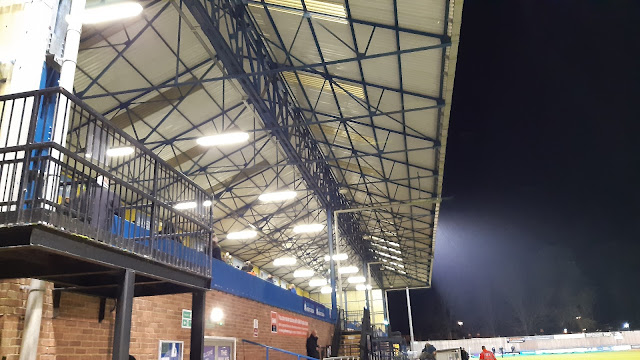 2 more 'saddos' appeared, namely 'Glennn from Ashington' and 'Blondie Alan the Morris Dancer', to make a grand total of 6 who had travelled doon! (There were actually 7, but 'Byzzy' woz nee where to be seen---but had been spotted in the centre of King's Lynn orlier on!)

The torrential rain and wind woz on the wild side az the game kicked off and so it woz!----'A WALK ON THE WILD SIDE AT 'THE WALK STADIUM! (sic!) (PS: A'v used a similar title to this when aa went to a Northern Alliance game in WARK, Northumberland a few years ago!---Which woz---"A 'WARK' ON THE WILD SIDE!")

There were a fair few Nohrich sprogs in attendance and it woz larger than wot we expected az Nohrich iz some 44 miles distant east from King's Lynn!

This woz a 7 goal thriller in the rain and the goal sequences were az follows! 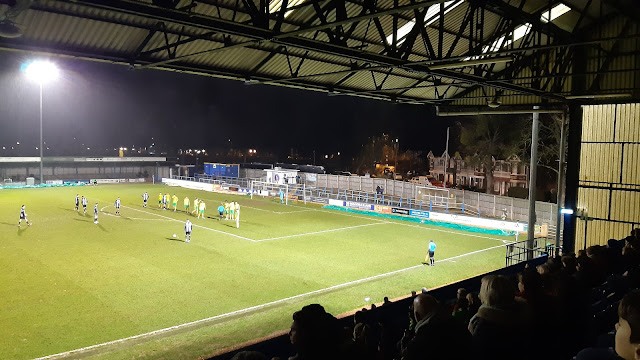 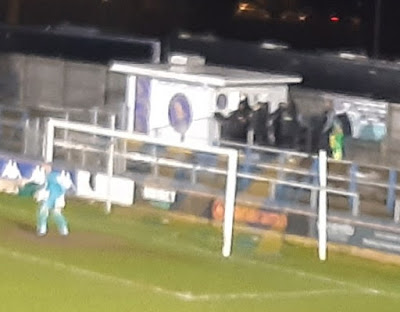 "CAN YOO SPOT THE REFRESMENT KIOSK?"

Durin the half time interval we spotted wot looked like an alien from another planet at the front of the  main stand!!!

But in fact it woz the Nohrich mascot caalled 'Carol Canary', supposedly dressed up in a canary suit and young fans took 'selfies' with hor!

The costume looked like sommik oot of a horror movie and nowt like a canary! (Which of course iz Nohrich's nickname!) 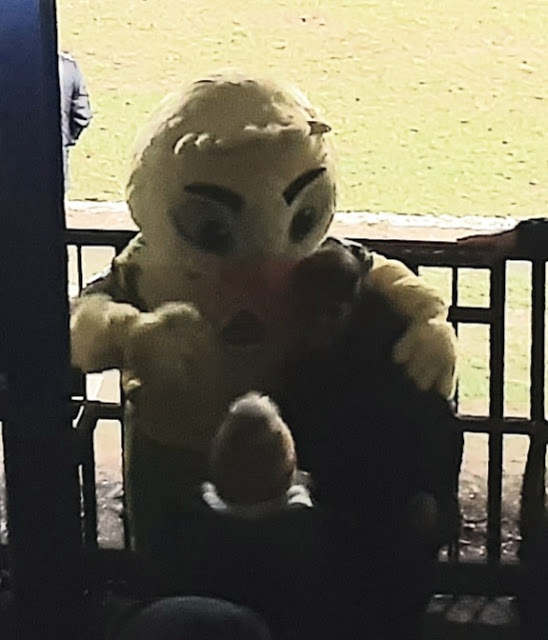 "DO NOT ADJUST YOUR SETS--NO!--THIS IZN'T AN ALIEN FROM A HORROR MOVIE!"

Aa needed a 'gypsy's kiss' so aa heeded for the 'tool-shed' and couldn't believe wot woz written on the bog seat! 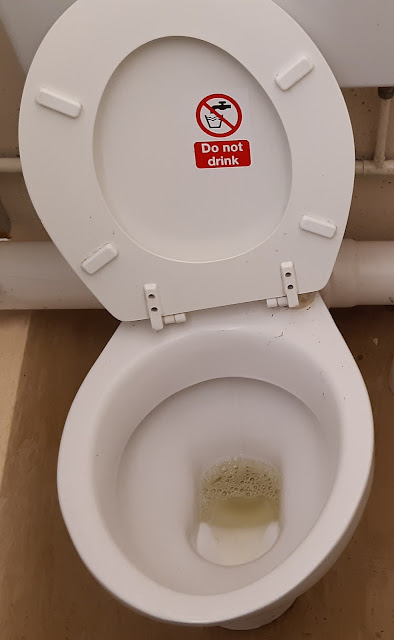 Are they that stupid in King's Lynn??? 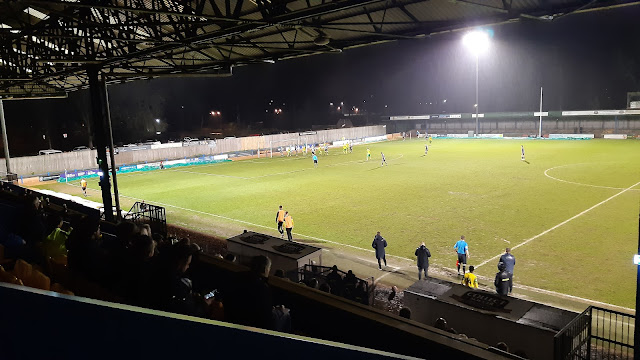 The 2nd half started off disastrously for the young Mags az the 'home' side scored straight after the kick off through Hutchinson, with 2 goals in quick succession to put us 3-1 behind and seemingly beaten az Nohrich attacked 'The Refreshment Kiosk End' and had several chances to increase their lead az it 'chucked doon' (rainin'!)

HOWEVER!---We are made of sterner stuff theeeze days and fought back with a shot from Adam Wilson just after the hour mark at 'The Jordan Fitness Terrace End' (No we havvint made this up!)  3-2 to them! 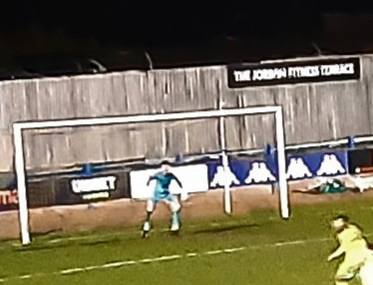 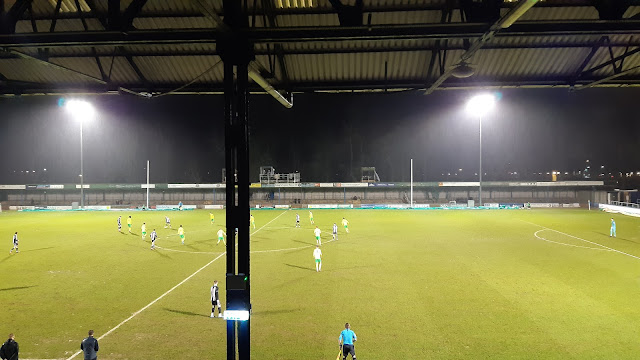 72nd minute: Turner-Cooke 'cooked Delia's books' with a fine shot to bring the score back to 3-3 at The  (Delia bein' Nohrich's celebrity chef owner) 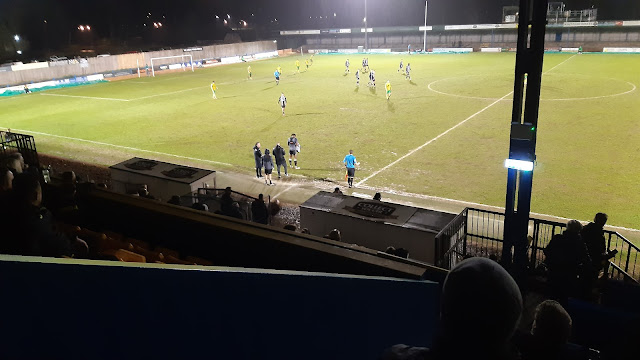 90th minute: Just when it looked az though the game would end in a draw, up stepped Issac Westendorf to fire across the box to win the game for wor U23s with us 6 celebratin wildly!  Wesdorf took hiz shirt off to celebrate and woz sent off by the ower zelious ref for a 2nd bookable offence ----a bitter sweet moment for Issac

A few mins stoppage time woz added, az Nohrich tried to get the score to 4-4, but we held oot for a fantastic 4-3 win! 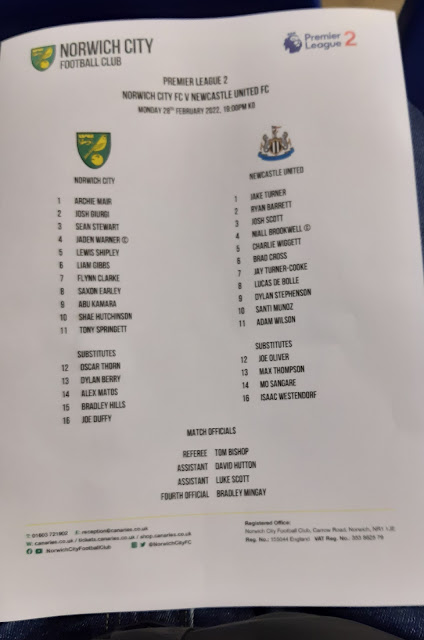 The jorney back took 4 hours and 418.4 miles after leavin wor hoose aa woz back yem at aboot '1:30am bells' 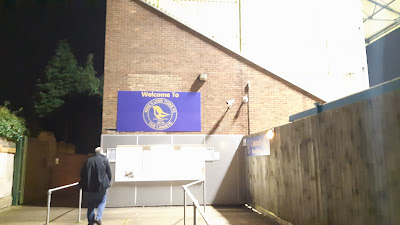 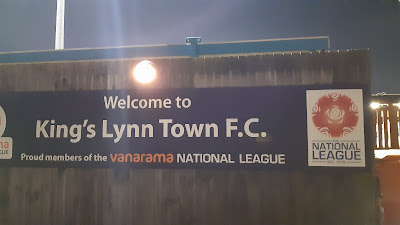 Posted by fink the mad-sad groundhopper at 13:13