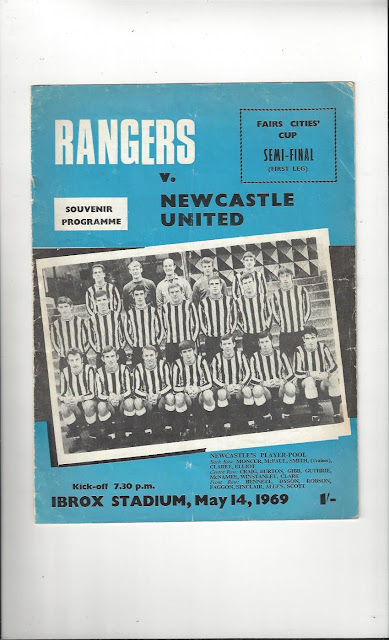 Yet another 'forst' for me. The forst time a'd ever been 'abroad'? tih watch Newcastle.

O.K.!, O.K.!, Scotland is hardly what yih can caall abroad!, but---to a school kid like me, it might as well have been Outer Mongolia!, as far as ah was concerned!.

Ah can remember gannin tih school the day before the game (Tuesday) and showin' mee match ticket tih mee envious school mates. The teacher saw what was gannin on, and telt iz tih give him a look at the ticket.

"What's it for?", he asked, with a puzzled look on his face.


(Obviously NOT a futbaall fan!)

"It's for the big match in Glasgow tomorrow sir, between Rangers and Newcastle", ah said, as though he SHOULD have known aboot it!?. (Did'nt EVERYBODY know?---ah thought!)

"But what about school?!", he said, in an outraged voice!.


But his reaction amazed iz. He just gave me one of those, 'THERE'S NO HOPE FOR YOU, LAD!', looks---shook his heed!---shrugged his shoulders!!---and waalked away!!!.

Ah could'nt understand his reaction!?---Ah mean---what's ONE DAY off school, tih see one of the greatest games in Newcastle's history!??.


Three of us were gannin tih the match, meesel, a lad caalled 'Ginger' and another lad who's name ah can't remember nuw.

Mee dad, who was readin' the 'Ronnie Gill', just glanced up at iz, and said, "Aalreet Alan, (mee real name) aal see yer when ah see yer!", and went back to his paper.


Wih made an early start the next day, and heeded for the West Road (in Newcastle) tih start hithin' a lift. There were loads of busses headin' for Scotland, with banners and scarfs hangin' from the windows.

Ah can remember one bus in particular, with loads of scarfs tied together, snakin' oot of the skylight of the bus, with a flag tied tih the end, which was nearly trailin' on the road behind the bus!. 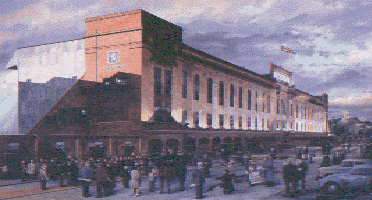 Several lifts later we arrived on the eastern ootskirts of Glasgow and decided tih waalk the rest of the way tih Ibrox. Wih foolishly asked a 'Wino' with greasy matted hair, who 'stunk the high heavens'!, how tih get tih the groond.

This was NOT! a wise move, as he was swiggin' a bottle of 'Meths' at the time!.

Ah said tih him, "Excuse me, could yih tell wih how tih get to Ibrox Park pleeze?".

The 'Wino', whos' 'dress sense' included a 'Rudolf the Reindeer' knitted jumper, (in MAY?) which sported several 'tab burn holes'.  A pair of shiny 'piss stained strides'!, (which were 'half mast'!) and looked az though they had'nt been washed for seventeen years!. PLUS! a very 'snazzy' pair of skeets that could 'taalk tih yih themselves'!, az the soles were hangin' off!

He could hardly stand up (or speak!) and he just 'eye-balled' us, an' in a very broad (and very slurred!) Glaswiegen accent, telt wih tih:


Wih decided not tih pursue this line of questionin', and left him in his inebriated state!, mumblin' sommik aboot 'Bannockburn'?, and carried on waalkin'.


Nuw Glasgow, as wih foond oot, is a very big place indeed!, and it took ages tih get within sight of Ibrox. When wih finally got there, afta an hours 'trek', wih noticed that aall the Rangers fans, young and old, were wearin' their blue 'n' white club scarfs.

We did'nt have any colours on, and wih stuck oot like 'a sore thumb', and got some 'dodgy looks!'. Ah noticed the club crest on the main stand, which was a 'Lion Rampant', with the word, 'READY', underneath. Ready for what?, ah thought!.

'Ginger' did'nt have a ticket, but he bought one ootside the turnstiles at face value. Needless tih say, he was ower the moon!.

One Rangers fan had a huge orange banner held up by sticks, featurin' a 'gadgie' with a 'Led Zeppelin haircut', dressed like a muskerteer and ridin' a white horse?, with 'WILLIAM OF ORANGE' '1690' written underneath??


Wih did'nt have a clue warrit meant----BUT! it looked brill! (Explaination: For aall yeez 'young pups'---'Led Zeppelin' were the forst ever 'heavy' music band from the '60's)

On enterin' the groond, ah was amazed at the size of Ibrox. It was a huge bowl, and was certainly the biggest groond that a'd EVER! been tee. (Er!---this was mee TENTH groond aall-told!)

When the players came oot onto the pitch, the roar was deafenin' from both sets of fans. We were standin' near the back of the open end, and because the players were so far away, they looked like 'matchstick models'!.

There was nee segregation, and the Toon and 'Gers' fans were mixed together.


Predictably, as the home team and with the vast majority of the crowd on their side, Rangers did most of the attackin', aalthough the Toon did have a few early chances, but neither team could break the deadlock.

Then, after aboot half an hour, disaster struck, when Newcastle goalie, Willie McFaul gave a penalty away. Andy Penman took it, and hit the shot tih McFauls right. Luckily, he dived the reet way and saved it, tih send the Toon fans into raptures!.


Wi'd escaped this time!, and Rangers had several chances after this, but could'nt put the baall away. This was thanks mainly to Newcastle Centre Half, John McNamee, who, was built like 'Frankensteins' monster!, and had been kickin' 'seven lumps of shite' oot of Rangers Centre Forward, one, Colin Stein!. (would you believe?)

An irate Rangers fan standin' a few yards away, was givin' him loads of 'verbal', and kept caallin' him a "DIRTY ENGLISH BASTARD!".


Wor Scottish 'friend' who waz half mortal, WAS’NT! impressed!, and gave iz one of those, 'LADDIE, DEE YAA FANCY A 'GLASGOW KISS'!--stares!. Ah took the hint!, and did'nt bother him after that!.


There were loads of light blue invalid cars parked aroond the wide oval track which suroonded the pitch. (Not 'blue' coz they were Rangers fans, but because THAT was the standard colour!)


With aboot ten minutes tih gan they started leavin' by the one exit at the far end. Before lang there was a tailback of aboot twenty or so tryin' tih get oot!


This iz the forst and anly time that av ever seen a 'traffic jam' INSIDE! a futbaall stadium!

The Toon hung on for a NIL-NIL draa---AND!---wih managed tih cadge a lift straight back tih the Toon az well!.

Wih went yhem very happy that neet---ah can tell yih!. And it was'nt lang before wih crashed oot on the back seat. Three very exausted and totally knacked school kids!---"ZZZZZZZZZzzzzzzzz!!!!!"

"ROLL ON THE SECOND LEG!"

The Toon won the return match at St. James' 2-0 with goals from Jimmy Scott and Jackie Sinclair.


(Riotin' Rangers fans had tried tih get the match abandoned by invadin' the pitch, and the game was held up for twenty minutes!)

Newcastle then went on tih lift the 'Fairs Cup' by beatin' Ujpest Dozsa from Hungary 6-2 on aggregate, in the two legged final.