THE VICTORIA GROUND, STOKE ON TRENT


"I DON'T KNOW ABOUT GEORDIELAND, SON!


BUT WE'VE GOT SPEED LIMITS IN HUDDERSFIELD!" 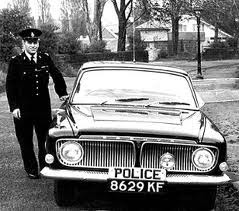 This match was played in the days before the likes of the M62 motorway was built. (Aye!---it was a lang time ago!)


Aa was seventeen at the time and had an aad Morris Minor 1000, which a'd bought off mee faatha after a'd passed mee drivin' test three months orlier.

Ah decided tih give the car a 'spin' and drove doon with three of mee mates. One was caalled 'Punter the Hunter' (he comes from Lobley Hill!), Dylan and the other was a kidda who went by the name of 'Yuk'! (where DID they get their names from in them dayz?--'Fink'  iz a far more 'civilised' 'monicer'!----divvint yee thinx???)

Because the 'said' M62 did'nt exist, wih had tih drive through the likes of Leeds, Huddersfield and Manchester on the ‘A62’  tih get to the 'Potteries'.


On the way through Huddersfield, ah was stopped for speedin' by an ower zelious traffic cop and like a scene from 'Z Cars' (a popular cop TV series of the 60s and 70s), the conversation went sommik like this:

Officer Dibble (leanin' through mee car window): "WHERE ARE YOU GOING, SON?".


Officer Dibble (notepad and pencil at the ready): "WHERE ARE YOU FROM, SON?".

After a lang pause, and a scratch of the heed, he just looked at iz, and said in a exaspirated voice,


"I DON'T KNOW ABOUT GEORDIELAND, SON!---BUT WE'VE GOT SPEED LIMITS IN HUDDERSFIELD!".


He lerriz off with a warnin', that he'd 'DO ME' if he caught iz speedin' again!.

After negotiatin’ the one way system in Manchester city centre we (eventually!) arrived in Stoke and parked up in a cobbled street in the shadow of the floodlights.


The Victoria Ground at that time was the oldest League groond in the world (Stoke had played there since 1878) and their groond back in 1971 it has tih be said, was one of the better ones, with cover on three sides.


‘Yuk’ and ‘Punter’ had had a few bottles of ‘dog’ and tins of  ‘McEwans lager’ on the way doon and with their heeds ‘aspinnin’, they decided to gan in the Stoke ‘hard end’ by themsels!   ‘Little old sober me’ and Dylan ‘opted oot’ and stayed in the main stand paddock instead where a few other Toon fans were situated!


The match itself was a 'ding dong affair', with the Toon comin'  back from a three-one doon, tih draw 'three's a piece', with two goals from 'Supermac' (who else?) and one from full back Davy Craig.


A'd escaped an endorsement and a speedin' fine, and the Toon had escaped with a point!. (Very satisfactory!)

On the return journey yem, passin' through Huddersfield, (deein' aboot twenty miles an hour!) ah kept a 'very wary' eye oot for 'Officer Dibble', but he was nee where tih be seen!. (Thank God!)


Sadly---(in my humble opinion!) Stoke, decided tih move to a new groond in 1997, a few hundred yards away from their aad one, thus givin' the title of the worlds oldest League groond tih Dumbarton, (of aal places!) who've played at Boghead Park since 1879.
Posted by fink the mad-sad groundhopper at 13:09