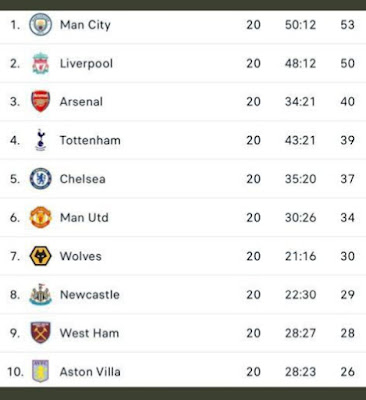 'HOWE' THE LEEGUE TABLE WOULD LOOK IF THE SEASON HAD STARTED WHEN EDDIE TOOK OWER!

Eddie Howe haz now been in charge of NUFC for 20 games!--When he took ower from 'Broken Nose Bruce' and interim manager Graeme Jones, we were 'rock bottom', in 20th place in the Premyaa Leegue table, with NEE wins and looked doomed to relegation---az rival fans took the p*ss! (NUFC had FIVE measly points from 11 games!)

"ALL THAT MONEY AND YOU'RE GOING DOWN!", they aall sang with delight!

WELL!---They arn't singin' that now!----ARE THEY?---az we are now 10 points from the 'abyss', after 'Steady Eddie' performed miracles with the existin' players and new January signings, to lift us oot of the drop zone!

Indeed, if the season had started when Eddie took the reigns from Graeme Jones, we would be in 8th place in the table now, with 8 wins and 5 draws oot of the 20 games!

The question on everybody's lips iz: HOWE haz he done it????

Posted by fink the mad-sad groundhopper at 12:30