"A DREAM COME TRUE!"---After the Nou Camp, Barcelona, this woz the next best groond aa wanted to visit in the whole wide world---and mee dream came true when we drew Inter Milan in the group stage of The Champions Leegue!
At last!---after a thorty three year wait ah would finally visit the one stadium in the world that a'v aalways wanted tih see the Toon play in, alang with The Nou Camp in Barcelonaa.

The last time wih played there in 1970 in the aad European Fairs Cup, ah was a mere 'slip of a lad' aged sixteen and simply could'nt afford it. (Aa meen---aa didn't even have a passport!)

(At the time ah was workin' in mee forst ever job az an apprentice fitter and turner on the Team Valley for the 'princely' sum of £5 a week!)

Ever since then ah dreamed of watchin' the Toon in one of the worlds best stadium--- and so!--- here ah was a thord of a century later (woz it really THAT! lang ago?) ready tih forfill mee dream!.

Az ever wih met up at the airport and made straight for wor 'rondiveuz' (sorree aboot thi spelin!) point in the bar!


It was qwaata tih five bells precisely when ah 'reported for duty' and 'Grumpy Stumpy' alang with his sixty inch 'girth' az usual 'were' proppin' up the bar with a pint of cider on the coontaa!.
ie: 'Grumpy Stumpy woz on the Scrumpy'!

(This had the added effect of preventin' anybody jumpin' the queue, az they could'nt get past him!)

In total this was mee seventh Champions League jaunt from Newcastle Airport that season, AND!---'ah kid you not'---a'd been here that many times, that the barmaid recognised izz and was pourin' mee drink oot even before ah asked for it! (honest!)

Aalso, ah had mee usual table (within hocklin' distance of the coonta!) so it was'nt too far for iz tih gan for the next 'Arthur Scargills'!(Gargels).

It was at this point that ah spotted 'Frainy' who was standin' in the 'coffee queue'!---tih be honest ah could'nt believe it!---a fellow Toon plonky of some thorty years standin' was in the---- COFFEE QUEUE!!??

Ah had tih rub mee 'mincers' tih mek sure it was true and 'Stumpy', not wantin' tih miss a photo oppotunity unzipped his case and hurriedly got his camera oot!.

"MEE BASTARD CAMRAZ NOT WORKIN!", said the frustrated photographer, az he undid the back tih see what was wrang!.


"THE BATTERIES ARE IN THE WRANG WAY ROOND YIH DAFT C**T!", ah said, az 'Frainy' clocked wih from the queue!.

Quick az a flash he moved tih the 'beer queue', claimin' that he'd joined the wrang queue by mistake, (a likely story!) but of course it was TOO late and the 'said' 'photo oppotunity' was missed!---"AAAARRRR"!!!

'Stumpy' sheepishly mumbled sommik aboot the batteries bein' dud---and hoyed it back in his case!-----

The airport, az yi'd expect was 'choka' with Toon fans (which was a far cry from the previous trip tih Jawmany) and an estimated 12,000 were said tih be mekin' the pilgrimage tih 'spaghettiland'!

Wor hotel was a  top of the range 'plush' 5 star job' in the suborbs and was aboot five miles from the centre of Milan and was caalled the 'Leonardo Da Vinci' afta the famous painter. (Ah NAA mee history yih naa!) 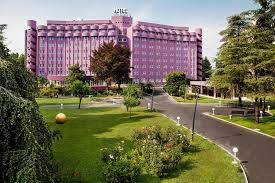 A mentioned this tih mee mate 'Norman the Cowboy Plumber' and said that if wih got 'rat-arsed' and disorientated, wi'd flag a taxi doon and tell the driver tih tek wih tih the hotel named afta the gadgie who cut his aan lug off!. 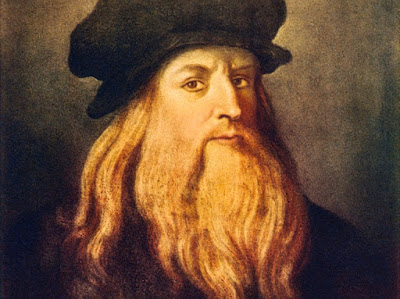 
Anyway!---after dumpin wor bags in wor rooms it woz time to flag a taxi doon for a wander aroond Milan city centre for the forst 'gargels'! There were thoosands of Toon fans there of course and the local bars had stuck their prices up accordingly! (5 Euros, plus!)

But bein' 'street wise' we heeded for the back alleys away from the bright lights where the 'gargels' were half the price in the 'dingy bars'!

The big game woz next day, so wih had plenty of time to get 'rat-arsed'----and many did!  On wor retorn to the hotel in the evenin', some Toon lasses known az 'The Happy Slappers' staggered through the main entrance carryin' one of their mates across the immaculate marble floor in the foyer!
She woz a 'wheel barrow' job and shih 'hoyed up' aall ower the floor az we looked on in amazement!----Hor mates then dragged hor to the lift and up to hor room to 'sleep it off'! (A 'propaa' Geordie lass!)

In the meantime a very well dressed posh lookin' lady walked into the hotel wearin a very expensive fur coat and long throw scarf to match.
She had a pair of leather knee length boots on, but didn't notice the spew aall ower the marble floor!---She walked straight into it az she heeded for the reception desk and slipped, az hor boot heels made contact!---She fell backwards and straight into the 'said' spew, which covered hor fur coat!----Me and 'Norman the Cowboy Plumber' just couldn't believe wot we saw and were in stitches az a porter rushed to hor assistance and helped hor to hor feet, az shih screamed sommik in Italian, az we looked on in amazement!
HONEST!---this iz TRUE, but in them days we didn't have camera phones and didn't get any pictures! (Dammit!)

Anyway!---It woz soon the day of the match and we excitedly made wor way to San Siro, the district of Milan where the stadium iz named after, but not before several 'liquid lubrication location' stops on the way!
We eventually arrived and I woz dumbstruck with the huge stadium az it appeared on the skyline, aall lit up!
After bein' hassled by the local 'Dibble' we were eventually allowed into the groond where 12,000 Toon fans were assembled behind one of the goals! 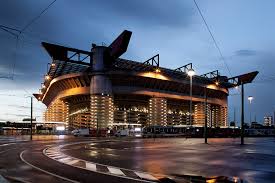 Inside the stadium woz less impressive than the outside however, az it woz full of faded bucket seats on 3 tiers!
My seat woz on the lower tier underneath the overhang of 2nd tier, where the Inter Milan fans were hoyin missiles and bottles plastic cups full of p*ss from, into wor section----so it woz just az well that aa woz in a covered sheltered section of the stand! (Welcome to the San Siro?)

Az the game kicked off there were loads of empty seats in the home sections of this 80,000 capacity stadium, which looked half full!

We gave az good az we got and sensationaly took the lead 3 minutes before half time when Craig Bellamy went past 2 Milan defenders and hiz pinpoint cross foond Alan Shearer who sidefooted home from 2 yards oot to send the 12,000 faithful wild with delight!  The Inter fans in response hoyed more cup of p*ss and othaa object from the upper decks!

However!---within just 2 minutes of the restart the home side equalised when Vieri heeded home to send the I-ties into a frenzy!
But it didn't take lang for us to retake the lead when a fumble by the Milan goalie fell nicely to Shearer and he made nee misstayk from 5 yards oot to again send the travellin' fans into ecstasy! 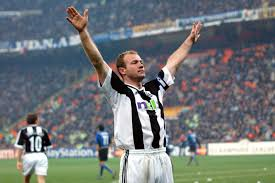 This time the home fans became more sinister and flares were hoyed into the Toon sections and one hit a lad and it bornt straight through hiz t shirt and onto hiz chest!  Luckily the burn wasn't too severe and he remained on the terraces!
He woz the son of one of the lads on wor trip caalled Bernie and he later telt us that hiz son woz actually half ITALIAN az that's where hiz mam came from!---Ironic to say the least!

Anyway!---We battled on and dreams of actually winnin away in this iconic stadium came to mind!
Unfortunately, it wasn't to be az Inter equalised on the hour mark through anothaa heeder, this time from Coroba, who rose above wor defence to send hiz powerful nod past Shay Given, actually got a finger tip to it, but woz unable to keep it oot!

2-2 the final score and we were (of course!) locked in for a good hour after the game had finished to allow the Inter fans to disperse!

It woz then back to central Milan to enjoy several 'gargels' before retirin' back to wor hotel for the neet, before catchin the flight yem the next mornin'!

In the afternoon before the game, one of wor party had decided to have an 'afternoon nap' after a heavy session! (FATAL!)
No one knew where he had gone tee and hiz mate couldn't find him!?  On hiz retorn to the hotel after the match, hiz mate went to hiz room to find him asleep on the bed!  He woke up and uttered the fateful words!
"IZ IT TIME TO GAN TO THE MATCH, YET?"----Hiz mate could hardly contain himself----"YI DAFT C**T!---We've BEEN to the match---we drew 2-2, Shearer got both wor goals!"---"AAAaaaaggghhh!"


Posted by fink the mad-sad groundhopper at 14:00