Amazing news reaches 'The Geordie Times' that the SMBs ticket office have cancelled some of the Wolves 2,589 away section tickets for their final home game of the season, just in case some Toon fans get their hands on them!
(The away section holds more than 4,000!)

Wolves, not suprizingly have asked for an extra allocation of tickets az they celebrate promotion to the top flight aftaa a 6 year absence!
The mackems REFUSED their request, az they were terrified of the fact that Toon fans would gloat at their demise, shud they gain admittance, like 2,000 did in 1987 when they were relegated to the 3rd Division by Gillingham! (So there will be at least 30,000 empty pink seats for the Wolves game!)

A Wolves loyalty points system iz in operation (just like The Toon) and anly the most loyal of their fans will get their hands on a prized ticket!
Diehard Wolves fans are hardly likely to sell them to Toon fans---are they?

The SMBs are a complete laughin' stock on and off the field!---What an absolute farce!😅

YI COULDN'T POSSIBLY MAKE IT UP!😄

Just foond oot why some Wolves tickets have been cancelled!
Apparently one of their fans put hiz match tickets on Twitter and a Toon fan copied them, claimin that he had them!

The SMBs ticket office saw this and cancelled the tickets barcode so they can't get in! 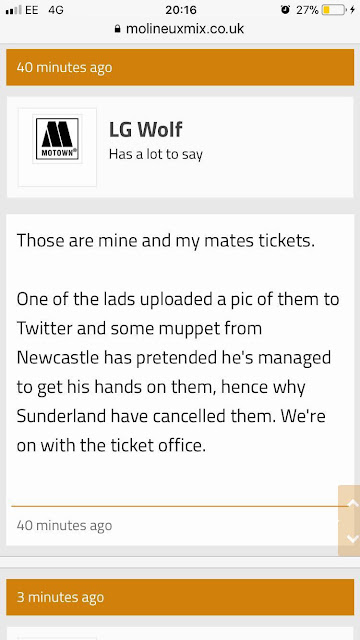 Posted by fink the mad-sad groundhopper at 16:27