"They know aall the wrong words!"

With yet anothaa blank weekend to fill in coz of the Internationals, aa heeded for Dunston where 'The Bad Blue Boys' were takin on Worksop in The FA Vase 2nd roond

A nice quiet and relaxin pint in the Dunston clubhoose woz the plan, BUT! az soon az aa walked through the door aa woz 'greeted' by a bar full of Worksop fans in their yellow and black garb singin 'The Blaydon Races' at the top of their voices to the WRANG words!?

Anyway!--it took ages to get sorved in the packed clubhoose and 'broon ale' woz on the 'menu' az aa continued wor "Lets Gan On A Bender In November!" campaign!

It woz soon time for kick off and aa heeded for the 'sanctuary' and 'noise free' area of the touchline az the Worksop Wanabeez heeded for the covered stand opposite, singin their songs with the wrang words!

It woz a freeezin caad afternoon with signs that winter woz just aroond the corner and the players from both sides seemed affected by the cold and just couldn't get into gear az the forst half ended nil-nil!

My attempt to get into the clubhoose at half time failed az they were queuin' oot the door to get sorved!
I estimated that it would take 20minutes to get sorved, by which time the 2nd half would have started, so aa opted for a waam cup of tea instead (now THAT WOULD pleeze the "Lets Go Sober In October!" brigade!)

The 2nd half didn't start well for Dunston az Worksop broke the deadlock after just 2 mins of the restart when their centre forward toe poked the baall into the back of the net to send the 80 or so visitors wild with delight!

It torned oot to be the anly goal of the game az The Bad Blue Boys tried in vain to get the equaliser that would have sent the game into extra time--they couldn't do it and it iz Worksop who will gan into the 3rd roond draw and the dream of a Wembley final!
Attendance: 368 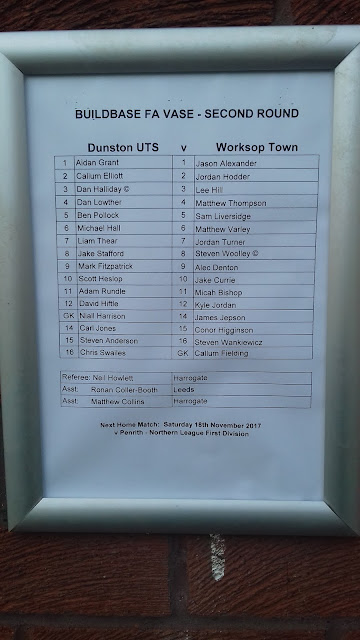 A mad rush back to the clubhoose az soon az the final whistle blew (to beat the Worksop fans!) meant that aa could continue wor "Lets Gan On A Bender!" campaign once again!

A'd bumped into an old mate and we then went to a new micro pub alang the road from the groond for somemore 'liquid lubrications' to defy the 'Sober In October!" brigade!


Posted by fink the mad-sad groundhopper at 10:06