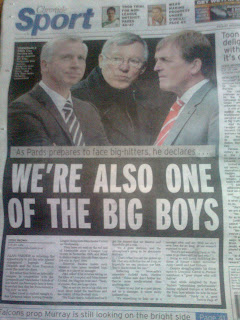 You just KNEW it wud aall gan wrang when wor manager 'I Beg Your Pardew' said in the 'Ronny Gill', "WE'RE ALSO  ONE OF THE BIG BOYS", comparin' us to the Man U's and Liverpool's of this world and of course it went 'tits up' @ Anfield!

Haris Vuckic was a suprize inclusion in the Toon's line up at the expense of Leon Best in midfield.

For the forst 20 minutes it was a dull affair with both teams findin' their feet, but then in the 25th minute a 'miracle' happened!----WE SCORED!
Attackin' The Anfield Road End where the Toon fans were housed, Ryan Taylor hoyed a great cross in for Yohan Cabaye to heed on and it looked as though Demba Ba aalso got a touch as the baall flew into the net for wor forst goal here for ower SEVEN YEARS!

It was awkward to see from wor crap vantage point in row 31 in the corner of the stand (see photo) as the sight lines are not very good here, but the stadium annooncer conformed that Demba had got wor goal!---or so we thought? (later to be given as an own goal)

Anyway!--The Toon fans were still celebratin' when just fower minutes later @ 'The Kop End', one of wor three ex players in the Liverbirds side, knaan affectionatally to Toon fans az 'The Poison Dwarf' (NO!--not Andy Pandy!--he's ower six foot taall!) scored the equaliser to dampen wor 'Chris'miss spirit'!
It was one's each at half time

The home side piled on the pressure in the second period and this paid off for them when a dodgy lookin' free kick from 30 yards oot was taken by 'The Poison Dwarf' and his effort deflected off Danny Simpson and into the net to put us behind!

Andy Pandy was gettin' some serious stick from the Toon fans and he responded to this by crashin' a heeder off wor cross bar, but thankfully it rebounded back into play!

It was game ower in the 78th minute when that curse of NUFC Steven Gerrard came off the subs bench and promptly sealed the match for them, with a shot across the box which flew into the corner of Tim Krul's goal!
(he aalways scores against us!)


PS: If yoo still cannit work oot just who 'The Poison Dwarf' iz, he once had an altercation with 'Big Al', wor record goal scorer and came off worse!
Does this ring a BELL!?
Posted by fink the mad-sad groundhopper at 09:56