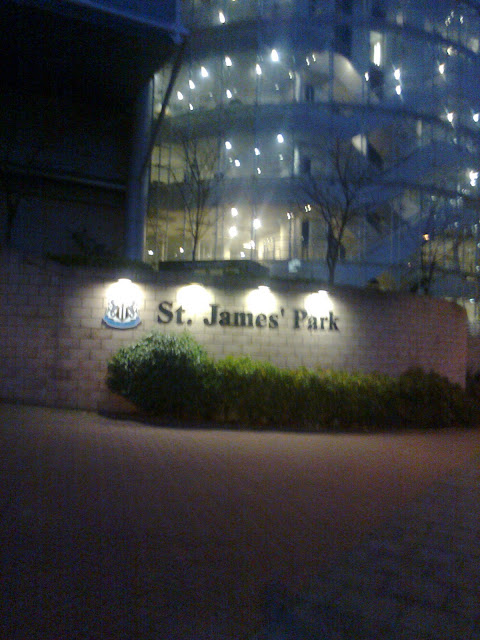 Posted '2:10 pm bells' Friday 11th November 2011
(Taken from the book: 'UNITED  THE  FIRST  100 YEARS')
Newcastle Rangers were formed in1878 and first played on 'The Drill Field', Alexandria Road in GATESHEAD because they couldn't find a pitch in their native town. (This is the site of Gateshead F.C.'s proposed new groond!)
They eventually moved across the Tyne taking over an enclosed ground close to Leazes Terrace in September 1880.
The pitch was immediately referred to as 'ST JAMES' PARK'. (St James Street is next to Leazes Terrace)

The following month the 'Newcastle Journal' noted that the Rangers club had, "Inaugurated their new ground close to Leazes Terrace on Saturday by a match between the first team and '15 of others'.
After a pleasant game of two hours it was found the captains team was victorious over his numerous but less experienced opponents to the extent of 6 goals to 1".

St James' Park was on the map!
The local press concluded, "The new ground is very nicely situated and is close to the centre of town. It is 120 yards by 60 yards broad and is completely level".
In spite of the latter statement the pitch in fact had a notorious slope, a drop of fully 18 feet from the north to the south goal!
ST JAMES' PARK SINCE 1880****
131 YEARS AND COONTIN'!

Posted by fink the mad-sad groundhopper at 12:08