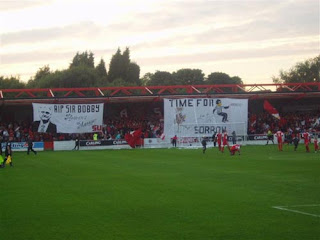 It was 'ten thorty bells' on a Wednesday neet and aa was glued to the telly to see the draa for the 2nd roond of the League Cup. Az as been to most of the grooonds , aa wanted an away tie against Rochdale, Accrington or MK Dons as these were the anly three teams left who a'd neva (ever!) seen the Toon play.


Accrington Stanley were forst oot the hat and aa said under baited breath, "that'll de—that'll de!", as wor lass cooked mee supper in the kitchen and sure enough The Toon were paired against them at The Croon Groond

"That'll de!---that'll F*****' DE!",
aa repeated loudly under 'elated breath' as aa danced roond the livin' room, punchin' the air in unbridled joy, not carin' wot the rest of the draa was!


The truth was that it was getting' harder and harder to de new groonds as aa ticked them off (10 a season, 10 years ago---doon to an average of 5 a season now)


For those of you who are aboot to purchase your forst zimmer frame and who can remember that classic 1970s advort where a scruffy juvenile delinquent Scouser, drinkin' a glass of milk , was told to sup it aall or he would end up playin' for Accrington Stanley----and he famously replied! , "Aacccccrington Staanleyy!---who are theyy!?"
Well!—guess wot!?--- Wor lass (who thought a'd gone completleee mad as aa danced around the room!) then asked iz who we'd got in the cup and when aa telt hor she replied!------(wait for it!)-------"ACKLINGTON
STANLEY!"---
"WHO ARE THEY!?------It was unreal! ("Er!"---"shih nearly got it reet!")

("Double Er!"---az far az a'm aware, 'Acklington' in Northumberland doesn't have a futbaall team?------but it
does have a prison!) 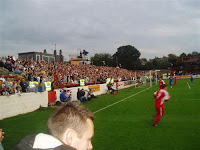 
"And a'm gannin' to Accrington tomorrow to watch the Toon!", aa replied excitedly, as aa raised mee fist in his direction!


A smug smile then came across his face as he took a swig from the Irish brew and he said, "Howay Fink!---where would ye RATHER be gannin' tomorrow, the sun kissed beaches of Mexico or rainy Accrington?---wherever that iz?"


"THE CROON GROOND of course!"---A'v neva been there before!" aa replied defientleee, (and of course aa MEANT IT!)


Cancun or The Croon???---aa new exactly where aa was gannin'!

After a few gargles in 'The Gloucester', it was time to heed for the pick up point at Gatesheed Metro where 'Tex' Taylor had asked to be picked up. 'The Caped Crusader's' bat mobile was once again to be wor mode of transport to 'rainy' Accrington and we set off at 'two bells' for the short two hour jorney to north Lancashire

On wor (eventual!) arrival (after gettin' lost on the ootskirts!) we spotted a pub caalled 'The Crown' and usin' wor powers of deduction worked oot that we must be 'getting' waam' as of course the groond had the same name---and we were reet!----as the main stand was handily placed behind the back of the boozer.


We parked nearby and waalked to the 'waaterin' den' in the brilliant sunshine (who mentioned rain?) where a mixture of 'Toon' fans and self proclaimed 'Stanley Ultras' frequented the bar and there were pennents hangin' on the waall from Wealdstone to Woking to name but two former opponents of Stanley, which shows how far they've come since then (indeed wor very aan Whitley Bay played here not so lang ago in a Northern Coonties league match!)

The bar was'nt too full at this time and we grabbed some seats beside a window and so we were 'set' till kick off time at '7:45 bells'!


Aboot an hour later six or seven rather obese 'happy slappers' came in the bar wearin' 'Accy' tee shirts with the words Stanley Ladies And GirlfriendS on the front (that's SLAGS! to you and me!) and their presence soon filled the bar up, I can tell you!


It was now approachin' KO time and the nerves were janglin' at the mooth waaterin' prospect of yet another groond to chalk off the list!


It was then a case of a short waalk to the away end where ten or so portacabin toolsheds were lined up against a breezeblock waall for those of us with weak bladders! (quite a few as it torned oot!)

Breezeblocks were aalso the order of the day for the waalls of 'The Coppice End' standin' terrace where we were situated and with ne roof it was just as well the old current bun was still present in the sky above us! (it was just like the 'good old days'? in 'The Gallowgate End', withoot a roof or plastic seat in sight!)


With a population aboot the size of Cullercoats and a groond the size of Whitley Bay's, this was the smaallest groond a'd been te for a propa game (league or cup) since aa started mee NUFC life sentence (1964!)

The main stand had aboot ten rows of seats while the stand on the other touchline was even smaaller with some 'new build hooses' behind owerlookin' parts of the pitch.and six 'lager louts' with an England flag were standin' on the roof of one of the hooses to get a part view of the proceedings as they swigged cans of alcoholic beverage ('The Accy Urchins'---perhaps!?!)


Just before the big K.O., 'The Stanley Ultras' who were situated in the covered ' Garden Hut End'? behind the far goal, unveiled a banner from the low roof, of Bobby 'yee naa who', sayin' that he was now: 'HEAVENS MANAGER!', a nice touch!----but then they went and
spoilt themsels!----by unveilin' another banner next to it which read!: 'TIME FOR SORROW!', which depicted a Andy Capp character in Stanley's colours kickin' a magpie up the arsenal regions! ("we'll F*****' see!")

The game kicked off and not one Toon player who had starred in the 6-0 thrashin' of Aston Villa on the previous Sunday were in the startin' line up, which in effect meant that we had a resorve team on the pitch.


We were kickin' towards 'The Hut' and after dominatin' the orly period took the lead in the 36minute when Ryan Taylor picked the baall up (not literally!) and rifled it home from fully 35yards oot and his reet foot effort gave 'The Milkmen's' keeper 'ne chance! (that's: one for sorrow!---for the Stanley fans anyway!) (ha!-ha!)


HOWEVER!---wor joy was short lived as just as the ref was aboot to blow for half time a Nile Ranger missteak let in Accy's Fothergill who fired home from 25 yards (one for sorrow each!)


This resulted in mass celebration from the home fans includin' the six 'urchins' on the hoose roof, where one nearly fell off as he jumped up and doon on the tiles! (glad aa divvint live next door to them—like!)


The Toon's 'second string' regained the lead just 3 minutes after the restart when Ranger made amends for his orlier blunder by slippin' the baall to Shola Ameobi who had the simple task of pokin' the baall home from 6yards in front of the 1,350 Toon fans in the now renamed 'Breezeblock Brick Enclosure'!
(two for joy!)

The sun had disappeared by this time to be replaced by a 'full moon'. The 'full moon' a'm taalkin' aboot wasn't in the sky but was on that roof, as one of their number dropped his strides to show his nether regions! (NOT A PRETTY SIGHT!)
Peter Lovencrands made it 3-1 in the 71st min when he hooked the baall into the net after it was deflected of a 'Accy' defender and I have to tell you that he 'milked' the applause from the away contingent as he stuck his index finger skywards!
(Reet!---OK!---that'll be the last 'milk' reference for the rest of the story!)

To their credit 'The Garden Hut Ultra's' had given their side 100% backin' from the start and they kept on cheerin' their side on even though it now looked a lost cause! (well done to them!)

Aalthough!---it has to be said that fower of the 'Accy Urchin roof brigade' had jumped ship! (or had faallin' off the roof , pist, as the case may be!?)

A predictable late scare for us happened deep into injury time when 'The Milkmen' (Er!—sorry!---aa forgot aa wasn't supposed to mention the 'white stuff' again!) scrambled a second goal and after a bit of 'nail bitin' from us the ref finally blew for time to put us in the draa for the next roond


Posted by fink the mad-sad groundhopper at 11:41