Attendance: 8,000 (includin' 54 Toon fans in the away section and a few more elsewhere!) 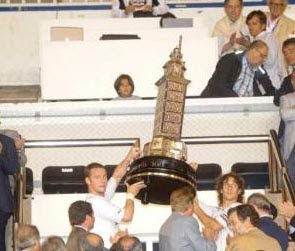 This was wor one and anly owerseas game we would get a chance to gan te and at half the price of wor forst visit here five years ago in 'The Inter Taaty Cup' (Inter Toto Cup) it was a bargain!

With anly fower flights to get us there and back instead of the SIX we did the forst time it was aalso an easier jorney.

Meesel, 'Mal the skool teecha' and 'The Caped Crusader' were the anly ones in wor company who embarked on this trip and we arrived in La Coruna (via Amsterdam) some nine hours after departin' from Toon Airport at 'six am bells'

The Riazor Hotel where we were based for 2 neets was nicely placed on the seafront and within sight of the otha 'Riazor' (Stadium) where Deportivo played, so we cud hardly forget where we were stayin' if we got lost! (unless we got 'rat-arsed' that iz!)

We didn't!---(we were half-rat-arsed!) and 'staggered' back to the hotel in the orly hours after a few 'liquid refreshments' in the local hostelries and retired for a good neets kip----------"ZZZZZZZzzzzzzz!!!!"

"IT CUD ANLY HAPPEN TO US!"

'Brekky' the next mornin', which 'Mal' had said was in with the room price was on the groond floor of the hotel, but we were suprized that when we got there it was'nt a 'buffet-help yersel' style set up for the size of the place (we were on the 11th floor!) and that it was a waiter service anly.

As yid expect the waiter could hardly speak any Geordie at aall and we tried to explain that we wanted an 'English fry up'. 'The Caped Crusader' (TCC), bein' a non meat eater asked for just an eggs fry up instead and five mins later the waiter reappeared with!-----three cheese an' ham toasties!

'TCC' took one look at the ham and promptly pushed it to one side and quick as a flash aa grabbed the plate before 'Mal' could blink an eye ("It's mine!---it's mine!")

And so aa ended up havin' two 'brekkies' instead, while TCC sat starvin' to death!

Jonesy from Winlaton then made an appearance and we telt him wot had happened. "Aa kin speak
Spanish like!", he said and promptly telt the waiter that TCC was a veggie and cud he have some kind of egg concoction coz he was clammin'!.

This seemed ti de the trick and within another five mins the waiter came back with a plate of fried eggs (horray!) and!--- some boiled HAM!

As yiv probably guessed he did'nt want the ham and so aa had another half brekky to boot!

We then foond oot that there was indeed a buffett in the forst floor restaurant, so!--- 'off we went' for some more much needed 'desperate dan'. Scrambled eggs and smaall sausages were on the menu and after we gave the waiter wor room number it was a 'double helpin' of the above for me to keep me gannin for the day! ("a'm a growin' lad yi naa!")

After a rest back in the room it was now time to gan on the traditional 'pre match bender' at 'ten bells'! (eleven hour before the nine pm kick off time!) but as usual 'The Caped Crusader' was stickin' to his orange anly drink diet as he likes to remember everything aboot the game! (that's OK if you win, but not if you get hammered!)

Jonesy was in the foyer as we heeded 'bar-wards' and he telt us that the brekky in the ground floor restaurant WASN'T free and that he'd had to pay ten euros for each of us!----and cud he have the 'bit' pleeeze!

Mal made straight for the checkout desk to complain, anly to find oot that in fact it WAS room anly and the 'desperate dan' WAS extra! and as wi'd had brekkies in two different places we were charged an extra ten euros for that as well! (it cud anly happen to us!)

La Coruna isn't a touristy place like the rest of Spain and there wasn't a sooviner shop in sight or any British bars eetha, (although there was (inevitably) an Irish bar!, where we partook in a few 'liquids' before movin' on to 'The Victoria' where we stopped for a while as the locals played some kind of crazy card game.

It was then off to a 'Chinkeez' bar ower the road from the sea front where an ancient episode of the cult American cowboy programme 'Bonanza' was on the telly with dubbed Spanish ower the characters voices and it was very strange to hear 'Ben', 'Joe' and 'Hoss' taalkin' away in fluent diego .

(Er!---this is a programme aa havvent seen on the box for at least 40 years!)

'Hoss' Cartwright was fightin' a 'baddie' who tried to stab him with a pitchfork and I have to tell you that after 100 (plus!) attempts to spear him, 'Hoss' finally got the better of 'the baddie' by wrestlin' him to the groond and stabbin' him with his aan pitchfork! ----'THE END!'

A move nearer to the groond 'was on the cards' and we purchased wor ridiculously priced 40 EUROS! tickets en route to the next waaterin' hole at the stadiums box office. (that's nearly 40 quid, incidentleee!) while the Deportivo season ticket holders didn't have to pay anythin', as admission to this game was included in their season ticket price! (200 Euros!)

Anyway!---after some more 'tonsil ticklin' at 'The Estadio bar', where a grand total of TWO other Toon fans were 'partisipatin' as well, we finished off wor nine hour drinks 'marathon' in the Alamanda and 'The Damubio' before staggerin' to the visitors tornstiles.

The crowd was quite smaall as aa surveyed the stadium, blury eyed and a quick coont by' yorz truelee' of the Toon fans who had travelled ower, revealed that (includin' ME!) there were 54 present, plus 6 home fans in wor section, with a smatterin' of 'Black n Whites' in otha parts of the ground

(The 'Ronny Gill' later said that there were 60 Toon fans, but they must have included the 6 home fans as well---even though they had blue n white striped shirts on!?)

'Super saddos' 'Glennn from Ashington' and 'Byzy' were unsurprisingly amongst the 'faithful few' and they couldn't wait to tell us that they'd got FREE tickets to get in! (just to rub salt into wor wounds!)

Glennn aalso telt us that they'd climbed to the top of the monument that dominates the city a couple of miles from the stadium, of which the trophy we were playin' for was an exact scaled doon replica . And so! he excitedly 'claimed'? that they'd actually stood on top of the trophy! (yes folks!-----it sureleee doesn't get any F*****'sadder than this!)

'Bysy' in fact was plannin' to gan to the Toon's resorve game at Luton the next day as (unlike us) he'd neva been to their groond before, providin' his bus connection got him to an airport near Bilbao on time to fly him to Luton (a canny hike from La Coruna!) (ower 300 miles!)

The Toon ran oot in their new aall white 'Real Madrid' away strip to rapturous applause from the '54 faithful', but to be honest we were nowt like wor Spanish counterparts as the anly 'action' in the forst period came via efforts from Barton, Best and Carroll and the 'best move' was when aa heeded for the 'toolshed' at half time!

On the way back to mee seat for the second period aa noticed 'Jonesy' and one of his 'sidekick' sneakily makin' A Sharp exit from a side door into the street (such was their interest in the game!)

The second half was a bit better than the forst (thank god!) and the action included a Wayne Routledge cross for Leon Best to narrowly heed wide and then with 5 mins to gan we had a great opportunity to seal the victory when the home keeper grabbed Coloccini's legs and brought him doon in the box.

Joey Barton stepped up to tek the resultin' 'spot kick', but he tamely hit it straight at the keeper with the baall reboundin'straight back to wor number 7 who then inexplicably'skied it' into row 'ZZ' with the goal at his mercy!---sendin' the cup final into a penalty shoot out!

The penalty shoot out went as follows:

Kevin Nolan then put us 2-1 up and decisively, Riki missed the target for Deportivo.

Andy Carroll made it 3-1, blastin' the baall doon the middle, while Athemi scored for them (3-2)

The climax came, when, for the second time, Joey Barton stepped up to tek wot would be the trophy winnin' kick if he scored. It was nail bitin' stuff as he ran up and this time he made ne mistake and blasted the baall past the hapless Deportivo keeper to win the coveted trophy as the '54 faithful' celebrated wildly on the terraces! (Er!---sorry!---mek that '52' as aa forgot aboot the two who 'pist off' at half time!)

It was just like a scene from that famous commentary by some drunken Norwegian, when they beat England 2-1 in a World Cup qualifier some thorty years ago, as the massive golden trophy was jointly lifted by Kevin Nolan and Coloccini, in the Deportivo directors box!-----(nearly givin' themsels a hornier in the process!)

"Oh when the Mags go up- to lift the Spanish Cup!"

'Bysy' didn't make it to the Luton game---the bus was late and the subsequent taxi he'd booked from Bilbao bus station didn't get him to the airport on time as the 'non English speakin' driver couldn't understand that he wanted to gan to the airport, despite 'Bysy' makin' frantic 'aeroplane motions' with his arms!

He missed his flight to Luton and had to re-book at an extra cost of 90 euros! (more than double the cost of the match ticket he got for nowt!) On top of that!, he'd pre paid £18 for a match ticket (that's reet! Eighteen quid to watch the resorves!) AND! (aye!---there's more!) he'd aalso paid for a hotel in Luton as well, which (of course!) he never got to stay in!

(A case of swings 'n' roondaboots , if ever there was one!)


Posted by fink the mad-sad groundhopper at 22:09