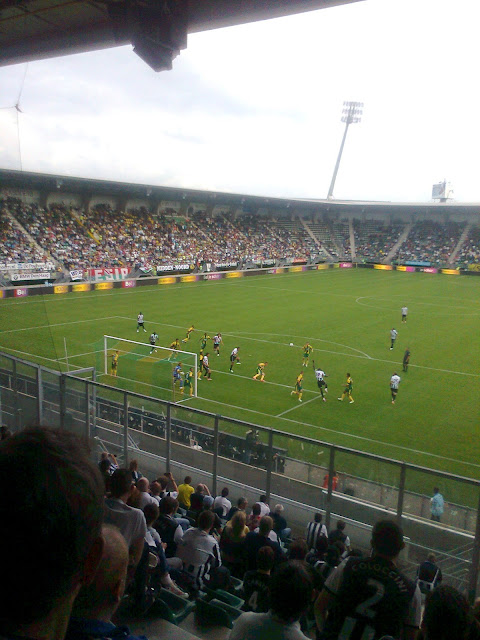 A borin’ 0-0 draw in The Hague was the result of this ‘non event’ friendly fixture!


However!---(and on the bright side!) we remain unbeaten in wor last five games on wor ‘European Pre Season Tour’!


Wor flight from Toon Airport to Amsterdam waz uneventful (apart from the fact that Toon goalie Steve Harper waz onboard az well!) and on landin’ we heeded straight for the train station to catch the train to The Hague (Den Haag)


The wethaa waz waam and sunny and we enjoyed several ‘liquid refreshments’ befor heedin’ for the ground, which (or course!), miles oot the way next to a motorway on the ootskirts of the city (“TAX-EEEEEE!”)


Den Haag’s notorious ‘Millwaall of Holland’ hooligan fans were NOT in evidence az we cautiously had the final pre match ‘gargels’ in their supporters club next to the ground and the ‘natives’ seemed friendly enough, az their ‘yellow n green home tops’ mingled with the ‘black n white Toon tops’ without any problems! 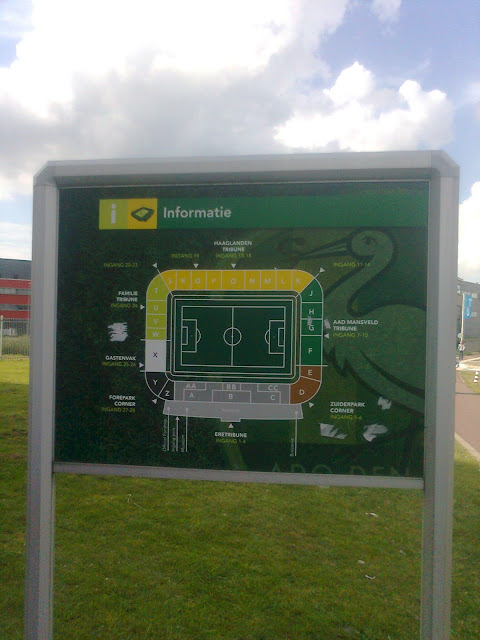 Suprizingly few Toon fans had made the relatively short trip to Holland and there were barely 300 diehards in the glass screen panelled away pen behind the goal!


The dark green seats of the Kyocera Stadion reminded me of Plymouth’s ground and it waz aboot the same size az Home Park.


The game kicked off and unfortunateleee this iz where the boredom started az both teams couldn’t produce the goods! 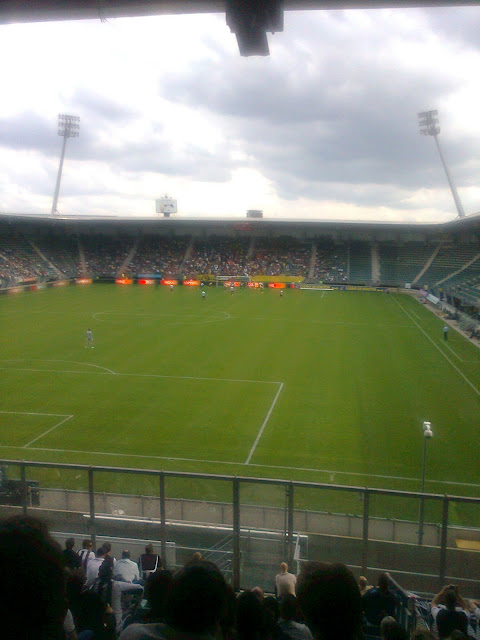 The ‘anly highlight’ waz near the end when a Mike Williamson heeder foond Shola Ameobi  who stabbed the baall home, anly for it to be ruled offside by the linesman on the far side from us!


After the match it waz back to the city centre for a few more ‘gargels’ before catchin’ the train to a packed Amsterdam, where the drink flowed til the orly hours!


We hadn’t booked an owerneet stay coz wor flight waz orly the next mornin’ and so (az yi de!) we stopped ‘on the hoy’ til ‘4 am bells’!<(when most of the bars closed!)


It waz then onward to Schipol Airport again to catch wor flight yem @ ‘8:10 bells’, but not before catchin’ up on some much needed kip on the airport loungers!