“WELCOME TO THE HOUSE OF ‘FUN’CHAL!” 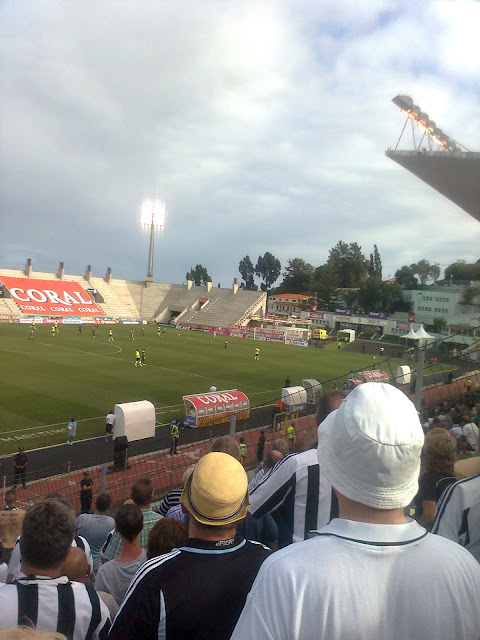 The marathon jorney to Madeira off the north African coast started at ‘8:30am bells’ on the Wednesday mornin' when aa said goodbye to wor lass for three days and heeded for the bus stop to catch the bus to the Toon and then onward to Toon airport via the Haymarket Metro station.


A said mee goodbyes to ‘thicko’ and caught the next Metro to the airport, where mee forst ‘port o caall’ waz (of course!) the pub beside the check in desks!


‘The Caped Crusader’ then torned up and we were soon on wor way to Brussels airport on the forst leg of wor jorney. With five hours to spare in Brussels we had plenty of time to sample the expensive Belgian beers on offer and at nearly 12 euros for two ‘Leffe Blonds’<(a message to wor lass---er!---that’s beer by the way my dearest!) it soon put a dent in mee budget!


It waz then onward to Lisbon to catch the last flight to Madeira where we arrived at ‘midneet plus thorty bells’the next mornin’ totally ‘cream crackered’ by this time!


The pre booked taxi to wor hotel waz waitin’ at Funchal airport and we eventually arrived at wor hotel in Funchal (the capital of Madeira) at ‘1:40am bells’----to find it locked up and ne sign of life!


After brayin’ on the door and ringin’ the hotel intercom bell for ten minutes we eventually got a reply from the manager who let us in and we finally got to sleep half an hour later!-----“ZZZZzzzz!!!!”


Next day (or shud that be a few hours later!?) we got up and after a quick shower and scran it waz off to explore the delights of Madeira. (the boozers!)


With the kick off at ‘six bells’ in the evenin’ and with the ground high in the moontains of Madeira we started off in the harbour area @ aroond '10:30 bells', before startin’ the steep climb towards a huge yellow tower crane which waz next to the ground.


After several ‘ports o caall’ we made for the ground which waz on a very steep incline (aboot 1 in 4!) and eventually arrived at the ticket office with aboot an hour to spare before the kick off to hand wor vouchers in in exchange for wor match tickets, where we half expected that epic explorer Ranulf Fiennes to greet us and present us with medals for completin’ the climb (the tw*t wasn’t there!)


However!--- there waz an NUFC official to greet us instead! and he telt us that we had selt a grand total of 83! tickets for the game!  But on enterin’ the buildin’ site ground (with it’s yellow crane!) we cud see that there were quite a few holiday makers who were there az well! (this boosted the attendance to aroond 150 in wor section!) (apparentleee---aall yi had ti de waz show a British passport and yoo got a ticket?) (so why oh why did we have to fill application forms in at the NUFC ticket office to get vouchers in exchange for the tickets???)


Three sides of ‘The Estadio Dos Barrios’<(‘The Doss Hoose Stadium’!)< (Geordie translation!) were under construction and the anly section open waz on the main stand side and there looked to be aroond aboot 4,000 inside az the game kicked off, with quite a few watchin’ from a cliff face road high above the ground to wor reet hand side (another 50 or so, we reckon!)


A mainly resorve team, apart from the back fower who had played at Goodison Park the previous Monday, ran oot to applause from the travellin’ faithful---and holiday makers!


It waz a terrible game really, although we DID hit the woodwork three times durin’ the match! (Shola twice and Dan Gosling!)


The home side aalso hit the woodwork once, but it waz anotha shambolic European away performance to forget! (well worth the hundreds of poonds it had cost us to get there!---NOT!)


After the match we heeded back doon the moontainside to the various boozers we had drank in on the way up (much easier doonhill!) 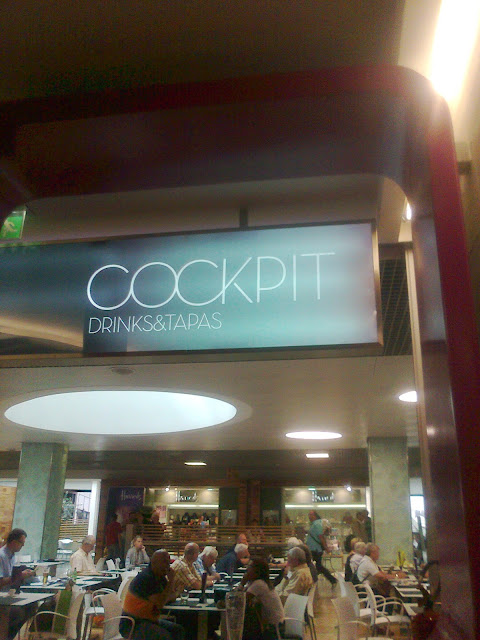 
We stayed up aall neet and of course we were completeleee 'blotto' (az yi'd expect!) by the time we heeded back to the airport at ‘4 am bells’ to catch the forst of three fights back to The Toon.
(17 and a half hours of continueous drinkin' takes it toll!) (Er!---that's apart from 90 minutes at the match!---like!)


The forst one back to Lisbon took two and a half hours and then we had to wait a fortha FIVE hours for wor next flight to Brussels again! (it waz anly FIVE euros a pint here, as opposed to SIX in Brussels)


For some unknown reason on the next flight to Brussels we were put into ‘Business Class’ seats where yoo are wined and dined!


Az we’d had ne sleep we ‘crashed oot’ straight away and aa cannit even remember takin’ off!


Halfway through the flight, aa woke up to see a hot meal on the middle seat tray table (no one waz sittin’ in that seat) and aa peeled the top of the meal carton back to reveal that it waz some kind of meat curry!


Az ‘The Caped Crusader’ iz a non meat eater and waz still asleep, aa naturally thought  that the steward had left it there for little old ME!, SO! (az yi de!)  aa started eatin’ it!


Aa waz just aboot to gobble up the last forkful when the steward approached me and said: “THAT WASN’T YOUR MEAL, SIR!---IT WAS A VEGETARIAN MEAL FOR YOUR FRIEND IN THE WINDOW SEAT!”


"SH*T!"---aa thought, and just then ‘The Caped Crusader’ awoke from hiz slumbers and aa had to tell him that a’d scoffed hiz scran!


But there WAZ a happy endin’ to this story, az a ‘fish dinner’ waz foond for him instead az he can eat fish! (he said he wouldn’t have eaten the veggie curry anyway, az he didn’t like curry!)


On the final flight from Brussels to Toon airport he fell asleep again!


A stewardess this time asked who waz ‘the veggie’ and aa pointed to ‘The Caped Crusader’ who again waz sittin’ in a window seat.


20 minutes before we were due to land he awoke and before aa had time to say owt, he folded hiz tray table up and his veggie meal fell onto the floor and disappeared underneath the seat in front!----NEVER! To be seen again! (HONEST!---THIS  F*****’  TRUE!)


After catchin’ the Metro and bus from the airport aa finally arrived yem at preciseleee ‘9:35pm bells’ totally ‘cream crackered’ once again some 17 hours and 35 minutes after leavin’ Madeira!


Aall in the life of an ‘NUFC mad-sad groundhopper’!

Posted by fink the mad-sad groundhopper at 09:33