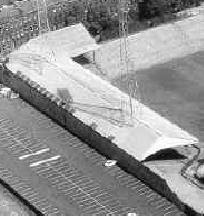 September the twelth nineteen sixty fower is a date that is indelibly etched in mee memory as St. James' Park was of course, the forst futbaall groond that a'd ever been tee! And the orliest game ah can remember attendin’ was against the ‘Sky Blues’ of Coventry City, when aa went there with a few of mee school mates


Brothers Rob & Alan and Joe & Richie alang with a lad who lived doon the street caalled Jackie , plus a few others (who's names aa can't recaall?) went tih the game, and it was 'shirt sleeve weather' on that waam September afternoon in 1964 with ‘Big Girls Don’t Cry’ boomin’ from the loudspeakers as the game was aboot to kick off! (NO!—aa can’t remember that!---but somehow Rob can!?)


We were in the old Leazes End that day, and this was mee 'birthplace' as a Newcastle fan, but little did aa realise at the time it was aalso the start of mee ‘life sentence’ as well!


The groond was a bit ram shackle and the facilities were a bit primitive in them days, aalthough aa thought it was like ‘heaven on orth’. (Hot dogs, peanuts and Dickmans pies were the fans staple diet back then, and the ‘tool sheds’ were like open sewers!)

The Leazes End was the anly cover for standin’ spectators while both the Popular Side (East Stand side) and Gallowgate End had ne cover at aall! The barrel roofed West Stand to the reet was the anly one with any seats (less than 5,000!) and it had an open standin’ paddock in front.


The fower floodlight pylons were massive (150 feet high) and could be seen from miles away (includin’ mee very aan front door!) and they completely dominated the Tyneside skyline

Several fans on the Popular Side had climbed some popular trees at the back for a better view of the proceedings, (hence the name!) as the game was aboot to start and there where a couple watchin’ from a window of the neighbourin’ Leazes Terrace which owerlooked that part of the groond

As the match was in progress ah hord a rattlin’ noise at the back of the terraces and torned aroond tih see the top of a huge three part ladder suddenly appear ower the back waall!.

A kidda’s heed then appeared ower the top of the ladder, as a ‘look out’ on the other side gave him the ‘aall clear’ (by stickin’ his fingers in hiz gob and whistlin’ twice!) The kidda then ‘bunked himsel ower’ the waall and scarpered intih the crowd, vanishin’ withoot trace!


He waz then followed by half a dozen more fans, frantically scramblin’ ower the waall tih gain their free admission! (sommik like ‘Escape from Colditz’!) (or in this case ‘Escape to St James’z’!) Then, an ‘eagle eyed’ ‘dibble’ spotted what was gannin on and ‘before yih knew it’ the ladder vanished just az quickly as it had appeared! He gave chase alang the back of the terraces, to a few more who had ‘escaped in’, haadin’ on tih his hat in the process, but he lost them in the crowd as they ‘did a runner’!, (Neva tih be seen again!) (And so for the ‘proper’ attendance read, 37,491! and not the one at the top of the page!) A great introduction tih ‘terrace life’ in ‘The Leazes’!


Another recollection of that day was the peanut seller dressed in a beige three qwaata length jacket and ‘Beetle crusher’ skeets on his ‘plates of meat’.


He was a lanky skinny gadgie with greasy combed back ‘Teddy Boy’ style hair who ‘skillfully’ threw bags of peanuts to individuals in the crowd with the accuracy of a professional darts player (but not before his punters had hoyed their tanner bits (2½p) onto the cinder track forst!) (he was’nt daft!) The amazin’ thing was he never missed! Even if the fans were standin’ at the back of the terraces


Oh yes!----aa nearly forgot aboot the match!----Mee momory’s a bit faded now (through old age and tooo much ale!) as it was a (very!) lang time ago, but aa can recaall that the Toon won two-nowt with ‘Cannonbaall’ Taylor and Barry Thomas scorin’ wor goals.

This was The Toon’s sixth game of the season, having won 3, drawn 1 and lost 1 (their most recent game, 1 – 0 away to Northampton Town). United were in sixth place when they welcomed table toppin’ Coventry City to Gallowgate.


Stan Anderson gave an ootstandin’ performance in midfield – a captain who led by example and he received excellent support from the tireless Trevor Hockey who finished the game covered with bumps and bruises but unbowed.

The Toon eventually opened the scoring seven minutes into the second half when Anderson brought the baall through in the left half position before squaring it to ‘Cannonbaall’ Taylor who let fly from fully 30 yards oot on the left wing. It flew like a rocket past half a dozen players as well as goalkeeper Wesson and ended up in the net. (So that’s why he was caalled ‘Cannonbaall’!)


The great Jackie Milburn was watching the game from the terraces (accordin’ to ‘The Jawnil’) and it must have brought back memories for him.

It was just after the hour mark that we increased wor lead. Hilley prodded the baall towards goal and Barrie Thomas went after it. Kearns, who was playing in the right back position, would have cleared off the line but Barrie collided into him as he put the baall into the net;


The ref allowed the goal to stand despite the Coventry protests. He seemed to lecture every player on the field. He did more than lecture McGarry; he sent him off! for raisin’ his fists to Coventry midfielder Ron Farmer and then givin’ him the best right hand uppercut to his chin that any professional boxer would have been proud of as Farmer went doon like ‘a sack of tatties’!


(McGarry was later nicknamed ‘Cassius’ after the heavyweight boxer Cassius Clay (aka: Mohammed Ali) because of the above incident-----and the name stuck!)

As the final whistle blew aa threw mee arms into the air in delight and was then ‘carried oot’ by the crowd as aa made mee way doon the Leazes stairs by liftin’ mee feet off the groond and with the pressure of the crowd from both sides, aa was (literally!) ‘shoehorned’ doon the stairs without touchin’ any of the steps! (this! is the way to travel---aa thought!)


It was then a mad dash to the Marlborough Crescent bus station (now the Centre for Life) to catch the bus yem and to eagerly wait for the Futbaall Pink seller to come doon wor street at aroond ‘six bells’ singin’ his ‘signature tune of: “FUTBAAAL FINIIIILLLL!”


‘UNITED IN PROMOTION FORM’ the ‘hot off the press’ headline screamed as the win lifted us up to fourth position.


Nuw how does that aad song gan again?

(To the tune of ‘I was born under a wandering star’)

♫I was born in The Leazes End!♫


This was aalso a great time tih become a supporter, as the Toon won the Old Second Division Championship at the end of that season!

Aa waz aalso telt later on that the ‘ladder method’ of gainin’ entry tih St James’ was’nt the anly one. Apparently one enterprizin’ gadgie with a battered high roofed removal van used tih park it against the Leazes End waall on matchday and charge kiddaz a shillin’ a time (5p) tih climb on top and sneak intih the groond! (Theeze days yi’d need a tower crane tih dee that!)


PS: It haz since been pointed oot to me by mee proof readers, namely, ‘Weeze Keys Clayton’ and ‘The Mad Professor’ that there are ne such trees as ‘popular’ trees!----they are in fact ‘poplar’ trees!---------my excuse is simple!----‘The History of British Trees and Shrubs at Major Football Grounds’ was neva one of mee favourite subjects at skoool and in any case the trees were very ‘popular’ with the fans for a great view of the pitch!


(So they were indeed ‘popular’ trees afta aall!)


PPS: Special thanx to ‘The Mad Professor’ who helped iz with the match report

Posted by fink the mad-sad groundhopper at 21:48