“HOPELESSLY DEVOTED TO YOU!”

Followin’ on from wor trip to Wolves the previous Saturday (see Wolves match report below) it woz a case of da va ju az aa had the same situation of 4 days before (lang  truck jorney—followed by little sleep –followed by lang train jorney to match!)

Mal the Inglish Skool Teechaa <(hiz spellin’ not mine!) had taken ‘devotion to duty’ to new extremes, for Mal had driven hiz car doon to Norwich on the Friday neet before the Wolves game, checked into a Travel Lodge near Norwich’s groond and caught a train the next mornin’ to Peterborough and then onward to Wolves from there!


And the reason he did this (az we wornt playin’ Norwich til the followin’ Tuesday) WOZ---he couldn’t leave lessons at the skool where he works on the day of Norwich game til 3:30 bells—not enough time to drive to Norfolk for the 7:45 bells’ kick off az it would have probably took him 5 hours to drive there through heavy traffic on the A1 the narrow windin’ Norfolk roads!


Hiz plan woz to catch a train to Peterborough and then to Norwich from there, (which would take considerably less time) and make the kick off with time to spare!


And then drive back through the neet az he had to be back at skool orly the next mornin’ (ne trains back of course after the match, that neet) (hence the car jorney back!)


I, on the othaa hand, had to gan to graft on the day after the game and the train times back the next day meant aa wouldn’t get back til mid Wednesday afternoon---tooo late for mee shift!


SO!---my plan woz slightly different---get train(s) to Norwich and ‘cadge’ a lift back in Mal’s car


Mal said he would put me up in hiz spare room at hiz hoose and give me a lift to Darlo station the next morning’ to catch an orly train back to the Toon---and so (az yi de that’s wot aa decided to de!)


(I HOPE YOO ARE FOLLOWIN’ AALL THIS?)

ANYWAY!—After anothaa night truck run to Redditch on Munday neet, aa managed to grab 4 hours kip from 3:30am to 7:30 bells’ before draggin’ meesel oot mee ‘scratch pit’and heed for ‘The Central’ once again and then onward to Norwich via Peterborough---
﻿


We arrived 4 hours before kick off and heeded for wor fave haunts doon here (The Woolpack, Murderers Arms etc!) before heedin’ for the match!
﻿
﻿


Thankfully Mal had ‘made it’  with 50 minutes to spare and we made a dream start when Perez fired home with just 23 SECONDS!


But the ‘dream soon torned into a ‘nighmare’ when in the 12th minute Lascelles slipped and let in Jarome who centred for Murphy, who had the easy task of sliddin’ the baall into wor net to level the scores.


Just 5 minutes later Darlow made a comple hash of a clearance and sliced the baall straight to Jarome who had the simple task of puttin’ the baall into the net az he celebrated BEFORE the baall had crossed the goal line! (2-1 to them HT) 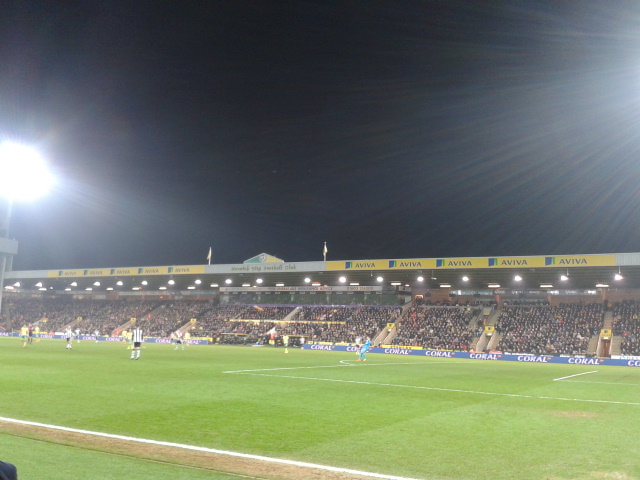 We had several chances to equalise but Lascelles made up for hiz orlier missteak by vollyin’ a shot into the roof of the net with just 9 minutes left on the clock!


Perez then missed a great chance to win the game, which ended aall square! (a point iz better than nowt!)


After the match it woz back to Mal’s car which had now been there 5 days! And we heeded back up the A47 and A1, arrivin’ at Mal’s abode at ‘2 bells’ in the mornin’!


A few hours kip later “ZZZZzzzz!!!!” and it woz off to Darlo Station to catch the 7:45 bells’ train to ‘The Central’


A couple of more hours kip at yem and then it woz ‘back to the grind’ and the 430 miles roond trip to deepest Worcestershire yet again!
(I woz divorted, 444 miles roond trip!)

Aaltogether now: (To the tune of “Hopelessly Devoted To You” by Olivia Newton John:


“When Perez gets to the ball!—you can bet your bottom dollar!


It will end up in the goal!---and the Geordie Fans will holler!


From my heart to my soul!

Posted by fink the mad-sad groundhopper at 14:03