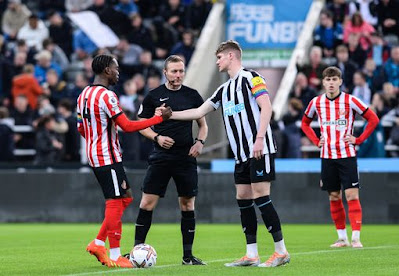 Last neet at SJP in the Tyne/wear resorve derby NUFC drew 1-1 with wor mackem counterparts, but the mackems equaliser in the 4th minute of stoppage time woz dubious to say the least!

It shud be noted that The SMBs actually fielded 4 forst team players in this game!

It started off well when Joe White scored with a fine shot at the Leazes End in the 33rd minute after a '1-2' with Dylan Stephenson from a short corner to send the vast majority of the 2,511 crowd in  the East Stand into raptures!

We held on til the dyin' moments with 10 men after Turner-Cooke woz shown a 2nd yellow card in the 79th minute!

Deep into stoppage time the SMB goalie Alex Bass ran up when a corner for them woz taken at The Leazes End.  He got a heed to the baall but put the baall into the net via hiz HAND!

The ref and linesmen missed it and the goal woz given, much to the annoyance of the Toon players and fans alike!

Aa naa goalie are allowed to handle the baall in their own box---but didn't realize that they were allowed to dee it in the OPPOSITION'S box????  A HALLOWEEN 'TRICK OR CHEAT' for certain!